Well this morning I asked my son to feed Geezer and give him some fresh water while I helped prepare the girls for a birthday party we had to go to.  He eagerly took the job and ran down to Geezer’s kennel.  He came up whisteling to himself and walking just a bit taller being proud he accomplished his very own job on the farm.

The day went on. We actually ended up going from one party to a second later that afternoon, then finally came home as the sun was setting… just in time to put Astro and Trixie away and give the animals their evening snack.

To my surprise I found Geezer locked in Astro and Trixie’s cage. He had dumped their water out and pushed their nesting box around.  He saw me as I walked around the corner and snorted excitedly at me saying, “let me out!!”

Apparently my son had left the door to his kennel unlocked and Geezer let himself out to explore the yard on his own.  Goofy pig. He had pushed the block away from the door as he squeezed his fat butt into their cage tryign to get to their chicken scratch and apparently the door closed behind him… Oops! haha. Poor guy must have been stuck in there all day!

I saw Astro and Trixie pacing around close by, very eager to get in the cage and check out the damage this big mean escape pig did to their hme.  Poor Trixie lost half of her eggs when the piggy was pushing her nesting box around and I took away the rest.  We shall see if she continues to lay more.

Geezer happily followed me to his kennel and got his evening treat and while I was taking care of him Trixie and Astro ran in to check out what Geezer had messed up and gobble up the treats I had left them as well.  Maxine got her grain and the chickens got an extra scoop of scratch. I had hoped to intice them to all come into the coop for the night instead of try to steal the grain from Maxine, but it didnt work.  The sun went down and eventually the chickens went in the coop for good; doors were closed and LOCKED and everyone was in for the night.

Goodnight from the Farm, and our silly little Escape Piggy. 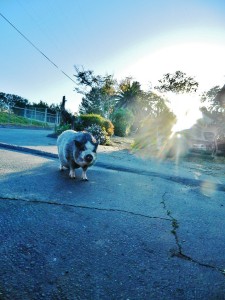